Some productions call for the super-steady look of a camera locked down on a tripod, in others, camera movement is essential. Moving the camera adds a dynamic touch to many shots but hand held movement can also introduce way too much camera wobble. So…

The compromise has traditional been a counter-weighted system such as Steadicam which, in professional hands can deliver smooth walking camera shots but which can also take an age to set up and would be useless in the car shot since they are also prone to being blown off course by wind (no comments please). We have one and, although it’s pretty good, we feel the pain.

Aerial camera platforms (drones) can produce fabulously steady shots, despite the camera being hung from a frame bouncing around in the sky just below half a dozen whirling propellers. This is all down to its motorised three-axis gimbal which senses movements away from the straight and narrow and adjusts itself to keep the camera steady. It really is terribly clever.

A couple of years ago we needed a shot driving up a narrow and extremely bumpy drive, so we did the obvious. Jeremy drove his convertible car up the drive while I stood on the front passenger seat holding the drone (sans props) out of space where the roof should be. Result? Pretty good actually, and it certainly did the job although, as I stood holding the drone aloft and trying not to fall out of the car, I did rather regret having skipped the surf lessons at my Norfolk school. Jeremy’s shouted instructions such as “mind the drone” could be taken as endorsement of the confident way I was “hanging five” on a sports car. “Could be”, you note, “could be”.

Technology moves on and now we have a hand held crane which takes all our latest cameras and delivers buttery smooth shots whilst moving around on foot, in a vehicle or even whilst being energetically rowed across open water … as you’ll see in the Summer Afternoon film, which we shot specifically to test the crane.

There are still creative decisions to be made about how each shot should be tackled and no one system, hand held, gimballed or tripod is “right” for every occasion but this seems to very usefully fill a gap between static tripod and hand held.

These are stills from a couple of shots filmed alongside the driver of an historic racing car competing flat out in a hill climb. See the short film Vintage Speed Trials, also on the Screen page.

Come to think of it, how come I get all the dangerous jobs? 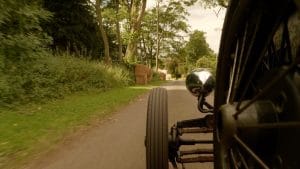