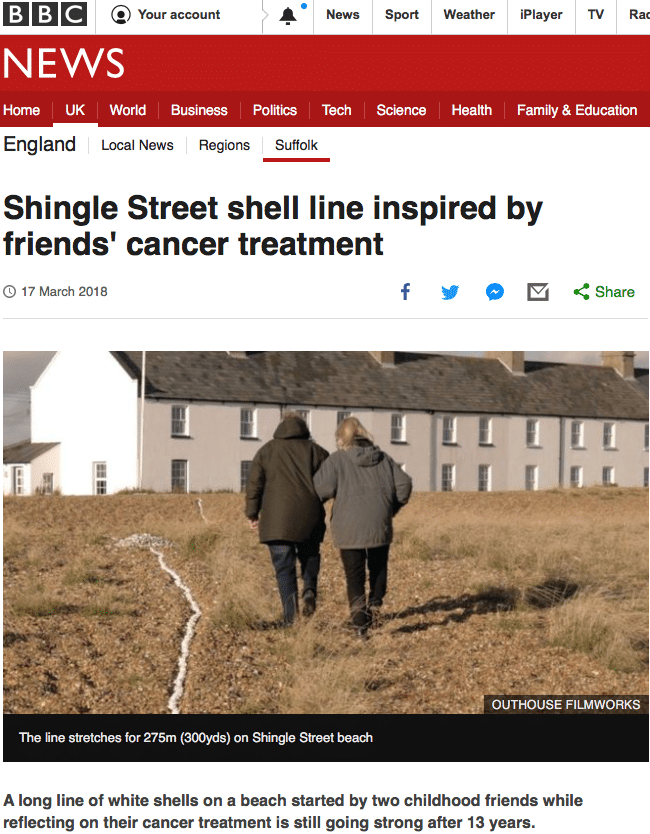 Well, that was a nice surprise to wake up to this morning. BBC News has given some great coverage to the Shingle Street Shell Line which Lida Kindersley and Els Bottema created and still maintain and the BBC illustrated the story with stills from our short film C shells.

We remain flattered that Lida and Els trusted us to help tell their very personal and inspiring story. It is sometimes almost overwhelming to experience the quiet intimacy and connection with people as they reveal details of their stories in front of the camera. Of course, it is our job to help them both recount and reflect on their experiences but we are frequently moved by what we are told, perhaps none more so than in this story of friendship and love. 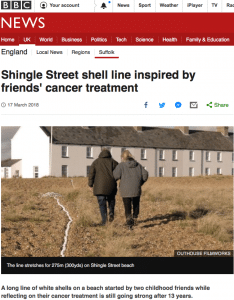 Our hope is that the BBC coverage will help the film reach a wider audience. Especially those for whom dealing with cancer is a real and current challenge.

We shot the film in 2016 and premiered it at Lida’s Cardozo-Kindersley Workshop in Cambridge last year. Subsequently it has also been screened in Holland followed by a Q&A with Jeremy. We have recently made a few more changes to the structure of the film and our friend and composer Mark Aaron also re-scored it to create a complete music track. So, even if you’ve seen it before, please take another look and, if you like what you see, pass the word on.

There will be a public screening next month at The Aldeburgh Bookshop when Lida and Els launch their delightful book about the line.

The story of how Jeremy and Peter came to be involved is told here, where you can watch the film right now.