Well, that was a long and fascinating day!

We just spent most of it filming in the kitchen at the beautiful Bruisyard Hall, here in Suffolk, where Gill Meller was creating a fabulous demonstration lunch for members of the Guild of Food Writers based on a theme of venison, venison and venison. Yes, three of the four courses featured wonderful wild game from the excellent Wild Meat Company with whom we have worked before. 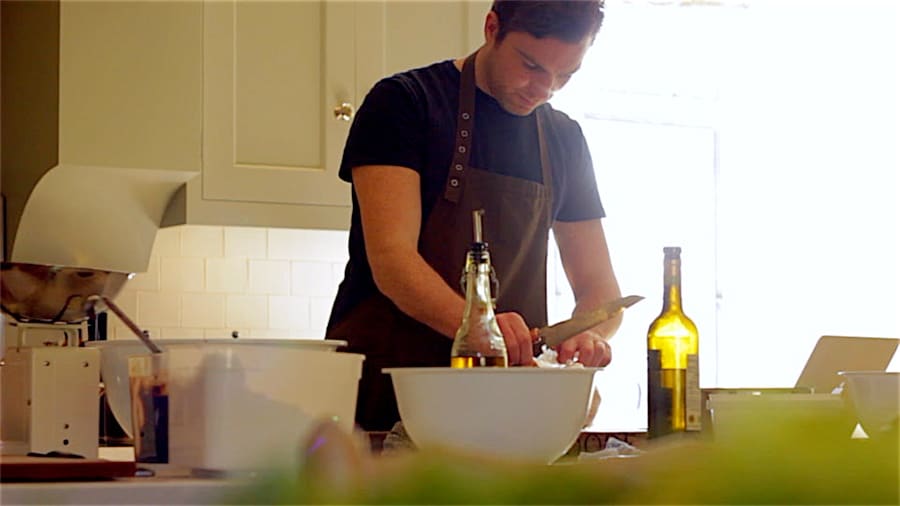 Gill drew on his extensive experience as a chef, food writer and key collaborator with Hugh Fearnley-Whittingstall at River Cottage.

Ably assisted by local chef Peter Harrison, who sourced many of the ingredients from nearby, Gill rustled up a lunch of four courses, three of which featured Wild Meat Company venison in different guises.

Of course Gill brought the authenticity of gathered food together with the River Cottage creativity – a treat for both mouth and eye!

Watching the chefs taking such pleasure in good, local, ingredients was thrilling. They were both genuinely confident of the quality, especially with the Wild Meat Company’s venison. 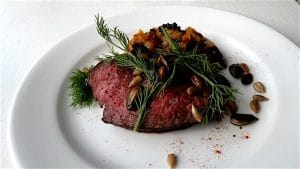 Seared and sliced loin of venison

A great deal of smoke (but no mirrors) erupted as the loin was seared in a very hot pan then thick-sliced and beautifully presented with toasted nuts and fennel.

We have a shot of Gill and Peter tasting the venison which may or may not make it into the film but it does give a sense that they’re pleased with the quality of the meat and the simple treatment it received. After early starts from locations all over the country to get up close and personal in the kitchen with a chef of such standing, Guild members were relieved to have something to get their teeth into.

Something of a surprise was to follow, a spectacular and suculent tartare of venison, served with roast oysters and tempura-battered wild garlic flowers. Yes, really, battered wild garlic flowers – picked fresh in the morning by Peter Harrison – they were subtle and delicious. The “normal” way is to serve oysters raw and cook the meat but this flipped things to reveal flavours in both that were a revelation.

The oysters exploded with flavour and a fabulous saltiness. For us as film makers there was the added pleasure of filming such good looking plates! 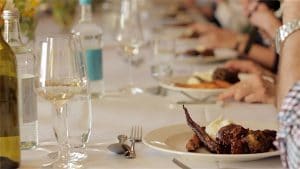 And then the centre piece, a hearty slow cooked venison stew with nettle dumplings. OK, there was a delicious desert involving home made celeriac ice-cream but the main action was on the venison.

Members of the Guild had spent some of the morning watching a butchery demonstration at the Wild Meat Company before arriving at Bruisyard.

We were filming a live and unpredictable demonstration, with two chefs moving around the kitchen, so it was not viable to take lighting in, we simply had to deal with the available (and variable) light qualities in the kitchen.

Running two main cameras, a roving camera and a fixed camera above the stove, we ended up with a lot of material. This was added to by a few exterior shots to give context – and we had to capture an aerial shot of that beautiful building didn’t we? Of course we did.

Those, though, are mere technical circumstances. The biggest challenge was simply being in the presence of such great food all day without the opportunity to stop and eat! That said, once the guild members had been served we did get a few minutes to sample the various dishes and enjoy a plate of the stew. Oh boy, those nettle dumplings! 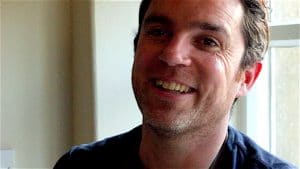 Our brief is to produce a short (2 minutes 30 secs) film to give a flavour of the day, rather than a “how-to” cooking programme.

See the film on our screen page and follow the link at the end for the recipe!

It was a real privilege to get to spend the day with Gill and Peter and apart from getting the film shot, we’ve learnt a thing or two about venison and acquired a few great food ideas!